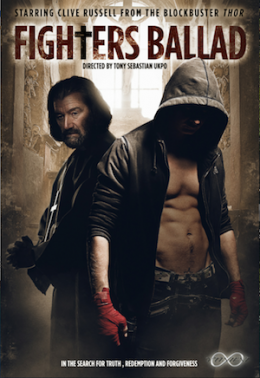 The story begins with a world-weary priest (Clive Russell) carrying out his mundane daily duties to a dwindling congregation. A violent, desperate man (Peter Cadwell) breaks into the church and begins a heavyweight bout of soul-searching and redemption, reflecting and refracting the anxiety and anger of contemporary society

NOMINATED FOR BEST DIRECTOR, PEOPLES AWARD AND REVELATION AWARD, AND WINNER OF BEST FEATURE FILM, BEST SCREENPLAY, BEST ACTOR (Peter Cadwell) JOHN PAUL II FILM FESTIVAL 2012 “”While some films depend on lavish CGI flights of fancy, The Fighter’s Ballad draws its strength from its simplicity. Taking place in a cavernous east London church, this is a stark two handed confrontation between the gentle-spirited Reverend John and the Fighter of the title – a loquacious ball of anger and despair who breaks in from the street. Though the rhythmic back and forth of their exchange often smacks of the stage, there’s an impressive visual sheen here – and the dialogue is given a weighty intensity by the superb performances of Peter Cadwell and Clive Russell.””
Danny Leigh – Film Critic & Co-host of BBC Film 2012