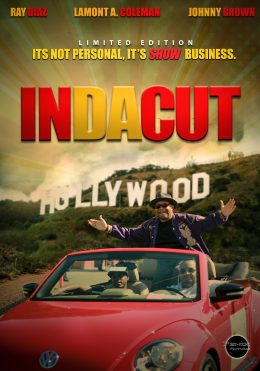 In Da Cut is a comically inspiring story of what comes after the legal age of adulthood and before the transition of taking on the full responsibilities of being a functioning member of society. The main character Michael is a young aspiring film maker, fresh out of school, who with his like-minded friends feel ready to take on the world. He wants to pursue the life he and his friend have always imagined, by chasing the illusion of beautiful women, big cash and quick recognition in the film circuit. On the path of fulfilling his life long dreams he comes to the shocking revelation that nothing in Hollywood is personal; it’s just show business.

-Features a young black man trying to make his way in the film world
-a meta film that deconstructs the glamor of the film buisness while simaltaneously depicting the growing up from the teen to the adult world Starring Legend Johnny Brown http://en.wikipedia.org/wiki/Johnny_Brown

-“In Da’ Cut is a coming of age story about a young man from the inner-city, navigating the thorny world of the Entertainment Industry.
-This dramedy takes you behind the scenes of the “business” part of show business and the challenges it can produce as christian family values collide against the bright lights and allure of the Hollywood Beast.
– A genuinely enjoyable performance from “Good Times” iconic actor, Johnny Brown, a.k.a. Bookman.

Biblical Films, presents “In Da’ Cut”, an award winning filmin the Best Religious Film category from the San Diego Black Film Festival andofficial selection of the Texas Film Festival and Oakland Film Festival.  Starring Lamont A. Coleman (Tyler Perry’s The Have and the Have Nots),Tyrone Burton (The Parent ‘Hood),Stephanie Gerard (Mujer, cassos de lavida real), and “Good Times” star,Johnny Brown as “Grandad”.  “In Da’ Cut” follows Michael Albert, a film school graduate who comes home with big
Hollywood  dreams of working at a major studio. Michael’s dreams of fast cars and Hollywood starlets, refusing to work for his family’s “small” Christian film production company until one of the hottest actresses in town takes an interest in their project.  Michael is swept into a world of deceit and betrayal while his friends and family, led by Grandad, do all they can to get him to
recognize that life is more than just a trip to the OSCARS; it’s a journey with the ones you really love.