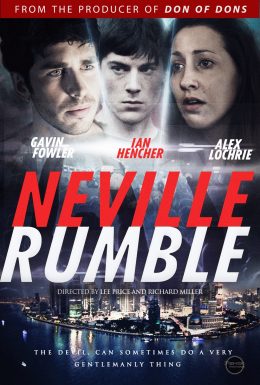 Neville Rumble (Ian Hencher) is an obsessive man. When he meets Lucy (Alex Lochrie) at a ‘people skills’ training course he becomes infatuated. He is left devastated and deeply depressed when she leaves town.

Three years later, in a chance meeting, Neville sees Lucy again. But she is with her fiancé (Gavin Fowler).

Unable to accept reality, Neville takes drastic steps. Lucy finds herself chained in an old cargo container, in an unknown location, not knowing Neville’s motives or his plans for the future.

As time passes the seesaw of power shifts and things start to go badly wrong for Neville.

Original self funded UK Thriller, First time feature for writers Richard Miller and Lee Price, A story never told before about a character with aspergers struggling to cope with rejection.

A definite twist on the classic love story, what starts out as a cute encounter at a ‘people skills course’ soon takes a downward spiral into something far more sinister. Neville Rumble is a wanton character who seems deeply disturbed and, above all else, lonely. A sad soul, who embodies a childlike petulance and, at times, an (uncomfortably) endearing innocence, depicted wonderfully by the film’s lead actor Ian Hencher. The film’s creators Lee Price and Richard Miller have accomplished a well-executed feature that continually builds suspense and tension with the viewer peering past door frames or over shoulders to view the scene before them. Staying close to Neville, his upper body is rarely in less than the full frame which immerses the viewer even more into the story as well as into his claustrophobia and isolation. A smooth editing pace coupled with a great soundtrack provided by independent musicians adds to Neville’s world and builds atmosphere around him. Made with a tiny crew and fantastic, at times beautiful, use of locations local to Warwickshire and the surrounding area, ‘Neville Rumble’ is a great achievement that will have the viewer constantly hooked for what’s coming next. If Neville’s love interest, Lucy, can keep her cool and her sanity remains to be seen