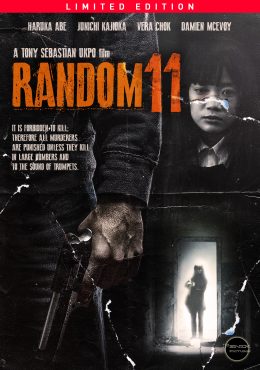 Prodigy detective Mitsuko Unagi is on the hunt for a notorious serial killer known only as “Eleven”. It started 10 years earlier, on February 29th 2006, when a series of murders began, involving 11 randomly selected victims killed simultaneously in various parts of Tokyo. The killings continue over the next decade, leaving the police with no evidence, no witnesses, and the killer always one step ahead. But now something is different, and the killer has changed his pattern, giving Detective Unagi the one chance to finally get closer to solving the mystery of the Random 11.

-a crime/revenge film, Engrossing, distrubing story about a series of murders.
-Take’s place in America and Japan with the main character being Japanese
-Stylish, beautiful black and white cinematography.
-Distinct, confident directorial style reminiscent of David Fincher’s “The Girl with the Dragon Tattoo, and “Zodiac”.
A Japanese manga & anime inspired mystery thriller, starring rising cult star Haruka Abe as a character reminiscent of Sherlock Holmes. With echoes of thrillers by David Fincher