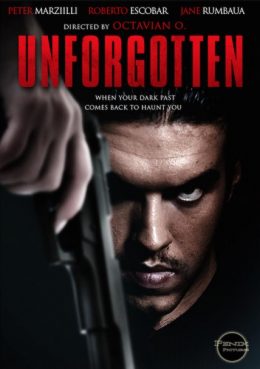 Professor James Earl Medina is a renowned University Professor and a loving family man. But someone from his dark past decided that they want revenge for something that the good professor did almost thirty years ago. The good professor has no choice but to go back to his former, tragic life in order to save his family. What follows is a collision between the professor and those who want to hurt him and his family.

A combination of a modern day gangster film with a traditional Western feel that keeps you at the edge of your seat the whole time.There’s an obsession these days with revenge films and the buyers look for films like this and UNFORGOTTEN delivers. Walmart, Target, Best buy demographics are perfect because in browsing for a movie Unforgotten stands out and spells out Hero, Revenge and action. UNFORGOTTEN is relevant because it provides tremendous entertainment value depicting a modern day action film with a traditional Western feel which makes this film very unique.
People who never heard about the film will want to buy it due to the intrigue and action depicted on the cover / poster and tag-line etc. Everyone loves a hero and UNFORGOTTEN depicts this very well. We here at New Beginning Films will and have.