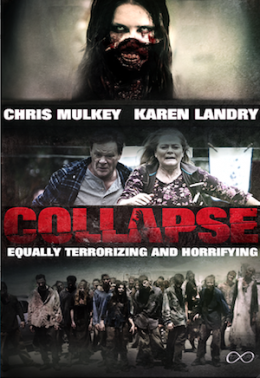 “When the world is suddenly filled with the undead, Robert Morgan’s (Chris Mulkey) worries are pulled away from how to keep the family farm to how to keep his family alive. With his wife Molly (Karen Landry) near the breaking point and his son bitten by one of the creatures, Robert must defend their home from the invaders. But as supplies run low and he is forced to venture out for food, Robert encounters more danger and must become even more brutal in his attempts to provide for his family. When other survivors appear, will they be able to help him, or will they turn out to be the greatest threat of all to his family?

With outstanding performances by the cast and makeup and effects from an award winning team, Collapse offers a new twist on the zombie film.”

“Aaward-winning actor David Cross who won an Emmy in 1993 for Outstanding Individual Achievement in Writing in a Variety or Music Program for The Ben Stiller Show
-Written, directed and produced by Gary Walkow; Walkow won the 1987 Sundance Film Festival Grand Jury Prize for The Trouble with Dick
-12 Annual Gen Art Film Festival opening night feature
-Crashing is the first sequel to a Sundance Grand Prize Winner”