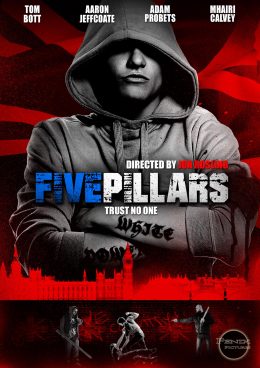 Starring Actor Rick Bithell is in a crime recreation on the BBC’s Crimewatch programme. Winner at the Southend On Sea Film Festival. Winner at the No Gloss Film Festival! There is a massive market in North America for high quality British independent films. Award winning classics such as FISH TANK, SUBMARINE, LONDON TO BRIGHTON and THIS IS ENGLAND have collectively taken in excess of $1 million at the US Box Office on their initial release. Figures from the British Film Institute show that British movies account for 16% of the North American film market, a figure that continues to grow each year with new high quality releases. FIVE PILLARS fits this mold of a uniquely independent, high quality, high production values British film. It is the debut film of it’s director and sits amongst the more modest budget productions from the UK such as KILL LIST and THIS IS ENGLAND. Marketed properly, as a cult British indie movie telling the story of our times, FIVE PILLARS could break out to the mass market quite easily as a film about something that ordinary people identify with. Reviews of the film have been positive. The London Film Review posted the following: “An impressive film that deals with a number of issues facing Britain today… A worthy addition to the current collection of films that are painting a vivid and realistic portrait of Britain in the 2010s… a powerful film that attempts to portray what it’s like to live in a divided country where many people feel as though they’ve been abandoned to their fate” Independent reviewer Johnny Meynell wrote: “a thought-provoking piece of work through clever, interweaving story lines which pull the film together. The scenes are portrayed with honesty and realism with wholly believable characters… Five Pillars never lends itself to a happy ending but such is the strength of the cinematic photography and honest portrayal of each character it succeeds nevertheless…”. The film is rising on IMDB and currently stand at 6.3/10, a modest rating for an indie movie not yet released.