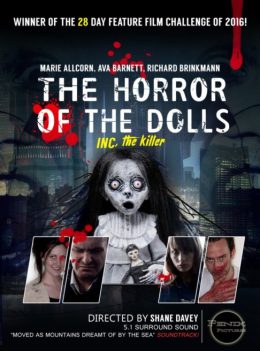 HORROR OF THE DOLLS

A corporation plans to develop a residential tower block into luxury city apartments. As the residents galvanize, the corporation sends in someone to ‘shake them up’. The Horror of The Dolls features a strong ensemble cast, inter-twined narratives and an iconic piece of London architecture. The narrative is underpinned by the wealth divide, untouchable high-finance, malleable politicians and the resolve of a community under assault. All wrapped in a blood-soaked and stylized horror thriller set against the breath-taking cityscapes of contemporary London. The Horror of The Dolls is a terrifying, atmospheric and unpredictable journey. Influences on the project are The Shining, Blue Velvet, The Wild Bunch, Short Cuts and Antichrist.

-Set in Great Britian, urban London
-in addition to being a blood letting horror film, it has an ensemble cast
-features the issue of class divide and has a corporation used as the villain
-Winner of the 28 day feature film challenege of 2010