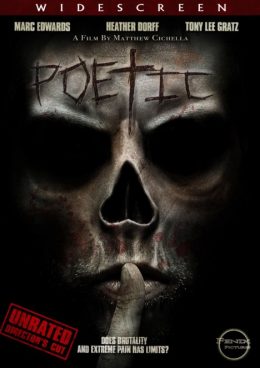 Poetic is an intense, sexy, character driven psychological horror film, that centers on a world full of deceit, passion, and revenge. One couple finds themselves caught in the middle of this when they are kidnapped by “Cowboy”, a mysterious and merciless renegade killer who takes karma in to his own hands. Now prisoners in their own home, the couple is turned against one another and forced to relive their dirty little secrets. Their domestic quarrel turns in to a nightmare they might never awaken from.

-a story with adultery as the premise

-devolves into a brutal slasher films